Long, long ago, in days of yore, there lived a king who had three sons, all of them grown to manhood. One day the king called them to him and said, "My sons. let each of you make a bow for himself and shoot an arrow. The maiden who brings your arrow back will be your bride; and he whose arrow is not returned will stay unwed." The eldest son shot an arrow and a prince's daughter brought it back. The middle son loosed an arrow and a general's daughter brought it back. But young Prince Ivan's arrow fell into a marsh and was brought back by a frog holding it between her teeth. The first two brothers were joyful and happy, but Prince Ivan was downcast and cried: "How can I live with a frog? Marrying is for a lifetime, it isn't like wading a stream or crossing a field!" He wept and wept but there was nothing for it: he had to marry the frog. All three couples were wed together according to the custom?the frog being held aloft on a platter. 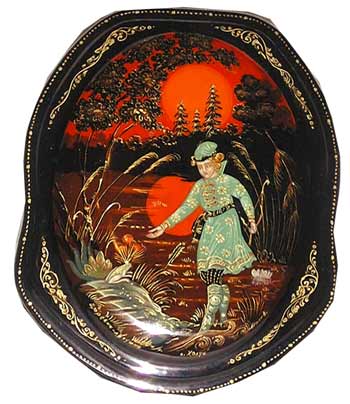 Some time passed. One day the king wished to see which bride was the best needle-woman. So he ordered them to make him a shirt. Poor Prince Ivan was again downcast and cried: "How can my frog sew? I'll be a laughing stock." The frog only jumped across the floor croaking. But no sooner was Prince Ivan asleep than she went outside, cast off her skin and turned into a beautiful maiden, calling. "Maids and matrons, sew me a shirt!" The maids and matrons straightway brought a finely-embroidered shirt: she took it, folded it and placed it alongside Prince Ivan.

There upon she turned back into a frog as if nothing had happened. In the morning Prince Ivan awoke and was overjoyed to find the shirt which he took forthwith to the king. The king gazed at it and said: "Now there's a shirt for you, fit to wear on holy days!" Then the middle brother brought a shirt, at which the king said, "This shirt is fit only for the bath-house!" And taking the eldest brother's shirt, he said, "And this one is fit only for a smoky peasant hut!" The king's sons went their separate ways, with the two eldest muttering among themselves, "We were surely wrong to mock at Prince Ivan's wife; she must be a cunning sorceress, not a frog."

Presently the king again issued a command: this time the daughters-in-law were each to bake a loaf of bread, and bring it to him to judge which bride was the best cook. The other two brides had made fun of the frog, but now they sent a chamber- maid to see how she would bake her loaf. The frog noticed the woman, so she kneaded some dough, rolled it out, made a hole in the stove and tipped the dough straight into the fire. The chambermaid ran to tell her mistresses, the royal brides, and they proceeded to do the same. But the crafty frog had tricked them; as soon as .the woman had gone, she retrieved the dough, cleaned and mended the stove as if nothing had happened, then went out on to the porch, cast off her skin and called, "Maids and matrons, bake me a loaf of bread such as my dear father used to eat on Sundays and holidays." In an instant the maids and matrons brought the bread. She took it, placed it beside Prince Ivan, and turned into a frog again. In the morning Prince Ivan awoke, took the loaf of bread and gave it to his father. His father was receiving the loaves brought by the elder brothers: their wives had dropped the dough into the fire just as the frog had done, so their bread was black and lumpy. First the king took the eldest son's loaf, inspected it and despatched it to the kitchen.

then he took the middle son's loaf and despatched it thither too. Then came Prince Ivan's turn: he presented his loaf to his father who looked at it and said, "Now this is bread fit to grace a holy day. It is not at all like the burnt offerings of my elder daughters-in-law!"

After that the king thought to hold a ball to see which of his sons' wives was the best dancer. AU the guests and daughters-in-law assembled; everyone was there except Prince Ivan, who thought: "How can I go to the ball with a frog?" And the poor prince began- to weep bitterly. "Do not cry, Prince Ivan," said the frog. "Go to the ball. I shall follow in an hour." Prince Ivan was somewhat cheered at the frog's words, and left for the ball. Then the frog cast off her skin and turned into a lovely maid dressed in finery. When she arrived at the ball, Prince Ivan was overjoyed, and the guests clapped their hands at the sight of such beauty. They began to eat and drink. But the frog-princess would eat and slip the bones into her sleeve, then drink and pour the dregs into her other sleeve. The elder brothers' wives saw this and followed suit, slipping bones into one sleeve and dregs into the other. When the time came for dancing, the king called upon his elder sons' wives but they insisted on the frog-princess dancing first. And she straightway took Prince Ivan's arm and came forward to dance. She danced and danced, whirling round and round, to the delight of all. When she shook her right sleeve, woods and lakes appeared; when she shook her left sleeve, all kinds of birds flew about. The guests were filled with wonder. When she finished dancing, everything disappeared. Then the wives of the two elder sons began to dance. They wished to do as the frog-princess had done, so they shook their right sleeves and bones flew out hitting folk about them; and when they shook their left sleeves, water splashed all over the onlookers. The king was most displeased and soon called an end to the dancing.

The ball was over. Prince Ivan rode off ahead of his wife, found the frogskin and burnt it. So when his wife returned and looked for the skin, it was nowhere to be seen. She lay down to sleep with Prince Ivan, but just before daybreak she said to him, "Oh, Prince Ivan, if only you had waited a little longer I would have been yours. Now God alone knows when we shall meet again. Farewell. If you wish to find me you must go beyond the Thrice-Nine Land to the Thrice-Ten Kingdom." And the frog-princess vanished.

A year went by, and Prince Ivan still pined for his wife. As a second year began, he made ready to leave, seeking first the blessing of his father and mother. He rode for a long way and eventually chanced upon a little hut facing the trees, with its back to him. "Little hut, little hut," he called. 'Turn your face to me, please, and your back to the trees." The little hut did as he said and Prince Ivan entered. There before him sat an old woman, who cried, "Fie, Foh! There was neither sight nor sound of Russian bones, yet now they come marching in of their own free will! Whither go you, Prince Ivan?" "First give me food and drink and put me to bed, old woman, then ask your questions." So the old woman gave food and drink and put him to bed. Then Prince Ivan said to her, "Grannie, I have set out to rescue Yelena the Fair." "Oh, my child," the old woman said, "you've waited too long! At first she spoke of you often, but now she no longer remembers you. I haven't seen her for a long time. Go now to my middle sister, she knows more than me." 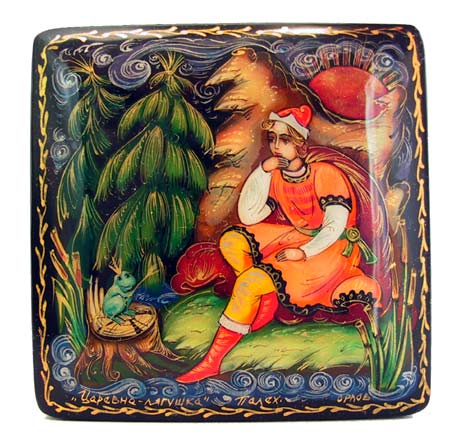 In the morning Prince Ivan set out, came to another little hut, and cried, "Little hut, little hut, turn your face to me, please, and your back to the trees." The little hut did as he said and Prince Ivan entered. There before him sat an old woman, who cried, "Fie, Foh! There was neither sight nor sound of Russian bones, yet now they come marching in of their own free will! Whither go you. Prince Ivan?" "I seek Yelena the Fair, Grannie-," he replied. "Oh, Prince Ivan," the old woman said, "you've waited too long! She has begun to forget you and is to marry another. She is now living with my eldest sister; go there now, but beware: as you approach they will know it is you. Yelena will turn into a spindle, her dress will turn to gold. My sister will wind the gold thread around the spindle and put it into a box which she will lock. But you must find the key, open the box, break the spindle, toss the top over your shoulder and the bottom before you. Then she will appear."

Off went Prince Ivan, came to the old woman's hut, entered and saw her wind- ing gold thread around a spindle; she then locked it in a box and hid the key. But Prince Ivan quickly found the key, opened the box, took out the spindle, broke it as he had been told, tossed the top over his shoulder and the bottom before him. All of a sudden, there was Yelena the Fair standing in front of him. "Oh, Prince Ivan,'' she sighed, "how long you were in coming! I almost wed another." And she told him that the other bridegroom would soon arrive. But, taking a magic carpet from the old woman, Yelena the Fair sat upon it and they soared up and away like birds. The bridegroom set off quickly in pursuit. He was clever and guessed that they had fled. He was within ten feet of them when they flew on the carpet into Rus. Just in time! He could not follow them there, so he turned back. But Prince Ivan and Yelena the Fair flew home to the rejoicing of all; and lived happily ever after.