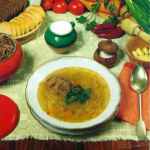 Russian cuisine had a large influence of cuisines of other countries (German, English, French), especially when Russian tsar Peter the Great "opened the window to Europe, as he expressed. In spite of that Russian cuisine preserved its individuality, singularity and uniqueness. Thus the Russian cooking is unthinkable without bread, pancakes, pies , porridges soups, without verity of fish and mushroom dishes, pickling. Russians pay much attention to dishes for first course - different kind of soups, they can be cooked of vegetables, meat, fish, mushrooms such as shchi, ukha, rassolnik, solyanka, botvinnik, okroshka.

Here you can see a list of some popular Russian recipes that can be cooked at home without much efforts.