Once there lived an old widower and his daughter. In due time, the man remarried to an older woman who had a daughter herself from a previous marriage. The woman doted on her own daughter, praising her at every opportunity, but she despised her stepdaughter

She found fault with everything the girl did and made her work long and hard all day long. 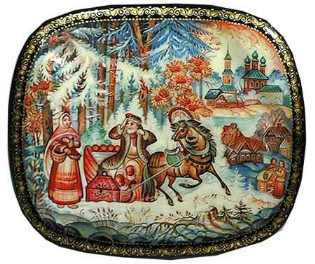 One day the old woman made up her mind to get rid of the stepdaughter once and for all. She ordered her husband:

The old man grieved and wept but he knew that he could do nothing else; his wife always had her way. So he took the girl into the forest and left her there. He turned back quickly so that he wouldn't have to see his girl freeze.

Oh, the poor thing, sitting there in the snow, with her body shivering and her teeth chattering! Then Morozko (the Father Frost), leaping from tree to tree, came upon her. "Are you warm, my lass?" he asked.

"Welcome, my dear Morozko. Yes, I am quite warm," she said, even though she was cold through and through.

At first, Morozko had wanted to freeze the life out of her with his icy grip. But he admired the young girl's stoicism and showed mercy. He gave her a warm fur coat and downy quilts before he left. In a short while, Morozko returned to check on the girl.

"Welcome again, my dear Morozko. Yes, I am very warm," she said.

And indeed she was warmer. So this time Morozko brought a large box for her to sit on. A little later, Morozko returned once more to ask how she was doing. She was doing quite well now, and this time Morozko gave her silver and gold jewelry to wear, with enough extra jewels to fill the box on which she was sitting!

Meanwhile, back at her father's hut, the old woman told her husband to go back into the forest to bring back the body of his daughter. He did as he was ordered. He arrived at the spot where had left her, and was overjoyed when he saw his daughter alive, wrapped in a sable coat and adorned with silver and gold. When he arrived home with his daughter and the box of jewels, his wife looked on in amazement. 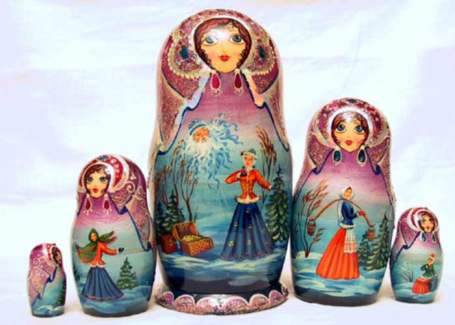 "Harness the horse, you old goat, and take my own daughter to that same spot in the forest and leave her there," she said.

The old man did as he was told. Like the other girl at first, the old woman's daughter began to shake and shiver. In a short while, Morozko came by and asked her how she was doing.

"Are you blind?" she replied. "Can't you see that my hands and feet are quite numb? Curse you, you miserable old man!" Dawn had hardly broken the next day when, back at the old man's hut, the old woman woke her husband and told him to bring back her daughter, adding:

"Be careful with the box of jewels." The old man obeyed and went to fetch the girl. A short while later, the gate to the yard creaked. The old woman went outside and saw her husband standing next to the sleigh. She rushed forward and pulled aside the sleigh's cover. To her horror, she saw the body of her daughter, frozen by an angry Morozko. She began to scream and berate her husband, but it was all in vein. Later, the old man's daughter married a neighbor, had children, and lived happily. Her father would visit his grandchildren every now and then, and remind them always to respect Old Man Winter