The subject of Saint George and The Dragon has been painted since the 7th Century. The cult of St. George originated in the fifth century in Cappadocia. The saint was probably martyred at Lydda (Diospolis) at the end of the third or the beginning of the fourth century. According to the earliest versions of his life, he was martyred by the Persian king Dadian, in later vitae transformed into the Emperor Diocletian. In Russia, the cult spread widely during the reign of Yaroslav the Wise (the earliest representation, from the 12th century, is the fresco in the church of St. George in Staraia Ladoga). 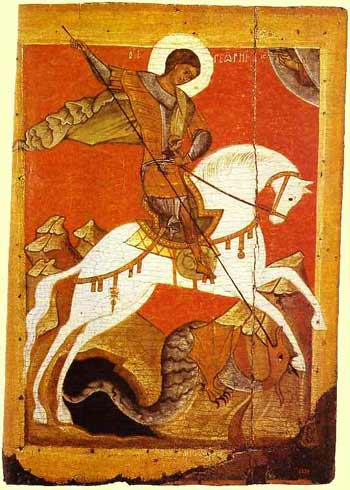 Legend tells us that in a lake in Lybia lived a dragon that the local people worshipped as a deity. Many children were sacrificed to appease the dragon. When it came time for the daughter of the king Saint George appeared on a horse. George arrived at the moment when the dragon was about to swallow the king?s daughter, princess Sabra. With words: ?In the name of The Father, The Son, and The Holy Spirit,? St. George drew his lance and knocked the dragon to the ground. His horse then trampled the dragon with its hoofs. Saint George commanded the princess to lead the dragon on a leash through the streets of the town, just as one would lead a tame animal. The king, queen and towns people witnessed this event from a distance. In mythology, combat with a serpent symbolizes a battle of good versus evil.

In Christian art a serpent or dragon is the symbol of the devil. This whole conflict is seen as good triumphing over evil. The citizens of the town were so impressed with this miracle that they converted to Christianity.

The image of Saint George and The Dragon is one of the most popular subjects in early Christian and Byzantine painting.

The icon ?St. George the Dragonslayer? is one of the most famous Russian icons. It is composition is remarkable and is based on harmony of rhythm created by the horse's neck, shield and halo. In the right upper corner of the icon you can see the hand of God extended from heaven to bless the saint and to indicate that St. George is just an instrument of God's will. Despite the Christian elements so clearly present in the icon, the shield of the saint is a symbol of the sun; this is possibly a reflection of the connection between St. George and the pagan sun-god Dazhbog. Since St. George's day (April 23) was the first day when the peasants took their flocks to the pasture and since Dazhbog's good will assured fertility of the fields and the general prosperity, the connection between the saint and the pagan god is quite understandable.