Masha and The Bear

Once upon a time there lived an old man and woman who had a granddaughter named Masha. One day some friends of Masha's decided to go to the forest to gather mushrooms and berries and they came to Masha's house to ask her to go with them.

"Please, Grannie and Grampa," said Masha, "do let me go to the forest"

"You may go but see that you keep close to the others and do not lose sight of them or you might get lost", the two old people replied.

Masha and her friends came to the forest and began to hunt for the mushrooms and berries. From bush to bush, from tree to tree went Masha. Before she knew it she had strayed away from her friends. When at last she saw that she was all alone she began to halloo and call to them, but her friends did not hear her and made no answer. Masha went here and there, she walked all over the forest, and there before her she saw a little hut. Masha knocked on the door but there was no answer, so she gave the door a push and lo! the door opened. Masha went into the hut and sat down on a bench by the window.

"I wonder who lives here she thought". Now in that hut lived a great big bear, only he was out walking in the forest just then. It was evening by the time he came home and when he saw Masha he was very pleased.

"Aha", said he, "now I'll never let you go!. You will live here in my house as meek as a mouse, and you will cook my dinner and my breakfast too, and be my servant, faithful and true."

Masha grieved and sorrowed for a long time, but it could not be helped, and so she stayed with the bear and kept house for him. Every day the bear would go into the forest for the day and before leaving, he would tell Masha to stay in the hut and wait for him.

"You must never go out without me, he told her, for if you do I will catch you and eat you up."

So Masha sat thing of how she could get away from the bear. All around was the forest and there was no one to ask which way to go. She thought and thought until she knew what to do.

That day, when the bear came back from the forest, Masha said to him:

" Bear, Bear do let me to to my village for a day. I want to take something good to eat for my Grandma and Grandpa."

"No that wont do at all" said the bear, "you will get lost in the forest, but if you give me what it is you want to give your Grandma and Grandpa, I will take it myself". 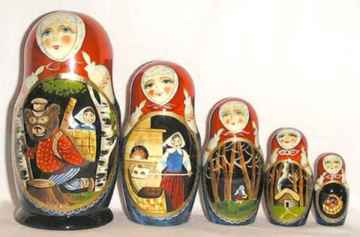 Now that was all that Masha wanted to hear. She baked some pies, put them on a plate, and getting out a very large basket, said to the bear:

The bear went out on the porch to make sure that it was not raining. When he did, Masha crawled into the basket and covered herself with the pies. The bear came in, and there was the basket all ready to go. So he strapped the basket on his back and started off. Tramp-tramp went the bear amid the spruce trees. Clumpity-clumphe went amid the birch trees, up hill and down dale went his long winding trail, and on and on he walked. At last he got tired and sat down to rest.

But Masha called out from the basket:

"I see you, I see you Don't sit on the stump And don't eat my pie But take it to Grandma And Grandpa, say I".

"Dear me what sharp eyes eyes Masha has", said the bear, "she sees everything".

He picked up the basket and went on. He stopped again and said:

But Masha called out again from the basket:

"What a clever little girls Masha is", said the bear. "She is sitting high up in a tree and she is far away, but she sees all I do and she hears all I say".

He got to his feet and walked on and on even faster than before. He came to the village and finding the house where Masha's grandfather and grandmother lived he began to bang away on the gate with all his might.

" KNOCK, KNOCK, open the gate", he cried, "I have brought something for you from Masha, he cried".

But the village dogs scented the bear and rushed out at him from every yard, yelping and barking. The bear was frightened, he set down the basket by the gate and away he ran as fast as he could without looking back.

The old man and woman came up to the gate and saw the basket.

"What is in the basket", the old woman asked.

The old man lifted the top, and looked and he could not believe his eyes. For there in the basket sat Masha alive and well. The old man and woman were overjoyed. They kissed and hugged and embraced. Masha and they said she was as clever as clever can be, as indeed all our readers will surely agree.