Ivan Tsarevitch and the Grey Wolf

Once upon a time there lived a Tsar who had three sons. The youngest was called Ivan. The Tsar had a wonderous garden. In it grew a tree with golden apples. Someone began coming to the Tsar's garden to steal the apples. The Tsar became upset about it. He sent some guards there. 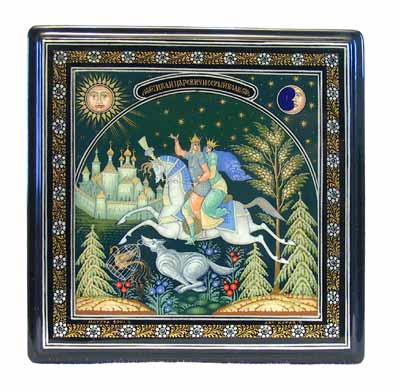 A little while before evening, there wasn't a trace of anyone, and he lay down on the soft grass and fell asleep. In the morning the Tsar asked him: "Well, enlighten me, did you see the culprit?" "No, Father, all night I didn't sleep, my eyes never closed, but I didn't see anything."

On the next night the middle son went to stand guard and also slept the whole night, but in the morning said that he hadn't seen the culprit. At last it was time for the youngest son to stand watch. Ivan went to guard his father's garden, and even though he was sitting there afraid, he didn't lie down. When he started to dream, he took dew from the grass and wiped the dream from his eyes.

Midnight came, and to him it appeared there was light in the garden. It got brighter and brighter. All the garden was lit up. He saw the Firebird sitting in the apple tree, pecking at the golden apples. Ivan Tsarevich crawled toward the apple tree and grabbed the bird by the tail. The Firebird flapped it's wings and flew away, leaving in Ivan's hand, one feather. 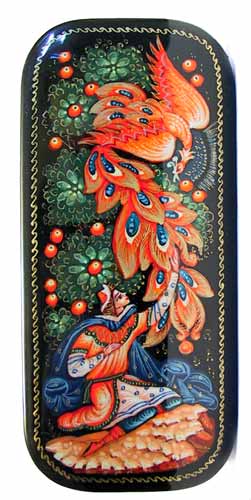 In the morning Ivan Tsarevich went to his father. "Well, my dear Vanya, you didn't see the culprit either?" "Dear Father, I remember but don't remember, who destroys our garden. Here is a memento from the culprit for you to take. It is, Dear Father, the Firebird."

The Tsar took the feather, and from that time began to eat and to drink, and knew no more sorrow. It was a beautiful time to him and he pondered about the Firebird. He called his sons and said to them: "My dear children, saddle would you good steeds, go would you about the wide world, to places unknown, where you might catch the Firebird.

The children bowed to their father, saddled good horses and set out on their way. The oldest in one direction, the middle in another, and Ivan Tsarevich in the third direction. Ivan went a long time, or a short time. The day was summery. Ivan Tsarevich grew tired, got down from his horse, fettered him, and tumbled down to sleep.

A long time or a short time passed, Ivan Tsarevich woke up and saw, no horse. He went to look for him, he walked and walked and hoped to find his horse nibbling on a bush. Thought Ivan Tsarevich: where without a horse to go in such remoteness? "Well, what of it, he thought, set out, nothing else to do." And he went on foot. He walked and walked, grew tired to death. Sat on the soft grass and grew more sad. From out of nowhere ran toward him the Grey Wolf. "What, Ivan Tsarevich, sitting there grieving, your head hanging?" "How can I not grieve, Grey Wolf?" I am left alone without a good steed." "It is I, Ivan Tsarevich, who ate your horse...I'm sorry! Tell me, why are you traveling in this remote place, where are you going?" "My father sent us to go about the wide world to find the Firebird." "Pooh, pooh, you on your own good horse could not in three years go to the Firebird. I alone know where he lives.

So, and it will be, I ate your horse, and I will serve you, it's only right. Sit on me and hold on tight." Ivan Tsarevich sat on his back and the Grey Wolf leapt flying through the blue forest faster than the eye could see, past rivers and lakes. For a long time, or a short time, they flew to a high fortress. The Grey Wolf said: "Listen to me, Ivan Tsarevich, and remember: crawl over the wall, don't be afraid, it's a lucky hour, all the guards are asleep. You will see in the terem window, on the window sill stands a golden cage, and in the cage sits the Firebird. Take the bird, lay him by your breast, and look but don't touch the cage!"

Ivan Tsarevich crawled over the wall, saw the terem, on the window sill sat the golden cage, and in the cage sat the Firebird. He took the bird, laid him by his breast, and looked at the cage. His heart caught fire: "Ah, such golden decoration! How can I not take it!" And he remembered what the Grey Wolf had said to him. He only touched the cage, throughout the fortress sounds: pipes piped, the guards woke up, grabbed Ivan Tsarevich and carried him to Tsar Afron. 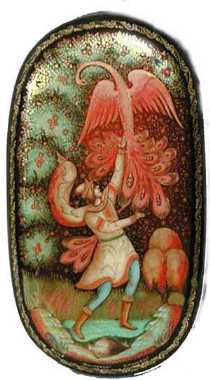 Tsar Afron was enraged and said: "Who are you, where are you from?" "I am the son of Tsar Ferapont. Ivan Tsarevich." "Ah, what a disgrace! A tsar's son goes out and steals." "But what about when your bird flew into our garden and destroyed it?" "But if you had come to me to ask for advice, I would have given him to you, out of respect for your father Tsar Ferapont. But now, about all the city, the most uncomplimentary glory upon you...

Well and all right, render to me a service, I ask you. In some-such principality Tsar Kusman has a horse with a golden mane. Bring him to me, then I will give you the Firebird with the cage. Ivan Tsarevich grew very excited, went to the Grey Wolf. But the wolf said to him: "I told you, don't disturb the cage! Why didn't you listen to my instructions?" "Well, I beg you, I beg you, Grey Wolf." "Well, well, I beg....Alright, sit on me. Take the rope, don't say that it is not strong." Again set off the Grey Wolf with Ivan Tsarevich.

For a long time, or a short time, they flew to the other fortress, where stood the horse with the golden mane. "Crawl, Ivan Tsarevich, over the wall, the guards are asleep, go to the stable, take the horse, and look, but don't touch the bridle." Ivan Tsarevich crawled into the fortress, all the guards were asleep.

He went to the stables, took the horse with the golden mane, and looked at the bridle. It was gold with precious stones. Ivan Tsarevich touched the bridle, and a loud noise went all through the fortress: pipes piped, the guards awoke, grabbed Ivan and carried him to Tsar Kusman. "Who are you, where are you from?" "I am Ivan Tsarevich." "Eeh, such stupidity to undertake, to steal a horse! On this even a simple peasant would agree." "Well, all right, I beg you, Ivan Tsarevich, render me a service.

Tsar Dalmat has a daughter, Elena Prekracnaya. (the beautiful) Go and get her, bring her to me, and I will give you the horse with the golden mane and his bridle." Ivan Tsarevich became more dejected than ever, he went toward the Grey Wolf. "I told you, Ivan Tsarevich: Don't touch the bridle! You didn't listen to my advice." "Well, I beg you, I beg you, Grey Wolf".

"Well well, you beg...yes, all right, sit on my back." Again sped off the grey wolf with Ivan Tsarevich. They rushed to Tsar Dalmat. He had a garden in his fortress where Elena Prekrasnaya walked with her mother and her nurse. Grey Wolf said: "This time I myself will go. You go back the way we came. I will soon catch up with you." Ivan Tsarevich went back the way they had come, and the Grey Wolf jumped over the wall and into the garden. He sat in hiding behind a bush and watched. 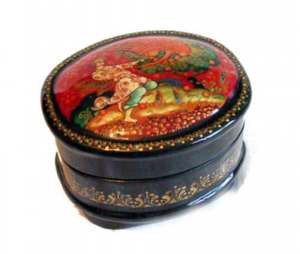 The Grey Wolf turned his head and became exactly like Elena Prekrasnaya. Ivan Tsarevich took him to Tsar Kusman. The Tsar rejoiced and began thanking him: "Thankyou, Ivan Tsarevich, for you have brought to me a bride. Take the horse with the golden mane and bridle." Ivan Tsarevich sat on the horse and went for Elena Prekracnaya. 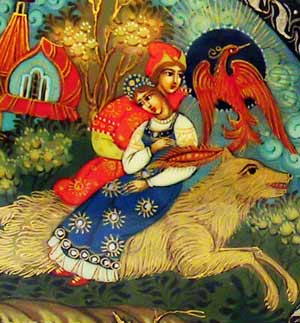 He picked her up and sat her on the horse and they set out on their way. Tsar Kusman had the wedding, and feasted all day until evening. Then he needed to lie down to sleep. But when he and his young wife went up the stairs, he looked, and in place of Elena Prekrasnaya was a wolf! The tsar turned angrily toward him, but the wolf ran off. The Grey Wolf caught up with Ivan Tsarevich and asked: "Why are you so sad, Ivan Tsarevich?" "How can I not be sad? It would be a pity to part with such a bridle, and to trade the horse with the golden mane for the Firebird." "Don't grieve, I will help you." And they traveled to Tsar Afron. The tsar was so surprised that he fell down right where he was standing, and the Grey Wolf took flight, quickly catching up with Ivan Tsarevich. "Now, farewell, I am not allowed to go any further." Ivan Tsarevich got down from his horse, and three times bowed down to the ground, with respect he thanked the Grey Wolf. Then he said: "You won't be parted with me forever, I again will call you into service." Ivan Tsarevich thought: "Aren't you already in my service, all of my wishes you have fufilled."

He sat on the horse with the golden mane, and again set out with Elena Prekrasnaya and the Firebird. They traveled into his region. They had only a little bread left. They traveled to a little spring and drank the water, and ate the bread, and lay down on the grass to rest. Ivan Tsarevich fell asleep. His brothers suddenly came upon him. They had traveled to other lands, seeking the firebird, and returned empty-handed. They came upon Ivan and saw all that he had acquired.

Then they said: "Let us kill our brother, all that he has gained will be ours." This decided, they killed Ivan Tsarevich. They saddled the horse with the golden mane, picked up the Firebird, sat Elena Prekrasnaya on the horse, and threatened her: "At home, don't say anything>" Ivan Tsarevich lay dead, two crows were already flying over him. From out of no where ran the Grey Wolf, and grabbed the crow and his wife. "You fly, crow, for the water of life and death. 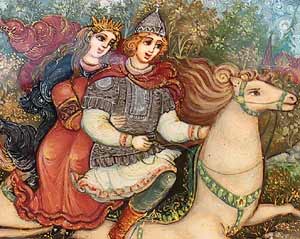 They rushed home, where, indeed, Ivan?s brother was preparing to marry Elena Prekrasnaya. No sooner had Ivan Tsarevich entered the castle, than Elena Prekrasnaya jumped up and threw her arms around him. ?This is my true bridegroom, Ivan!? she cried, ?Not the evil brother sitting there!? And she told the Tsar everything the brothers had done, and how they had threatened to kill her if she told anyone what had happened.

The Tsar was very angry and threw the two oldest brothers into the dungeon. Then Ivan Tsarevich married Elena Prekrasnaya, and they lived happily ever after.