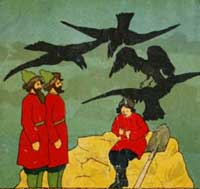 Once upon a time a merchant's son had too much fun spending money, and the day came when he saw himself ruined; he had nothing to eat, nothing to drink. He took a shovel and went to the market place to see if perchance somebody would hire him as a worker.

A rich, proud merchant, worth many, many thousands, came along in a gilded carriage. All the fellows at the market place, as soon as they perceived him, rushed away and hid themselves in the corners. Only one remained, and this one was our merchant's son.

"Dost thou look for work, good fellow? Let me hire thee," the very rich merchant said to him.

"A hundred rubles a day will be sufficient for me."

"If too much, go and look for some one else; plenty of people were around and when they saw thee coming, all of them rushed away."

"All right. To-morrow come to the landing place."

The next day, early in the morning, our merchant's son arrived at the landing; the very rich merchant was already there waiting.

They boarded a ship and went to sea. For quite a long time they journeyed, and finally they perceived an island. Upon that island there were high mountains, and near the shore something seemed to be in flames.

"Yonder is something like fire," said the merchant's son.

They landed, came ashore, and--look there! the rich merchant's wife is hastening to meet him, and along with her their young daughter, a lovely girl, prettier than you could think or even dream of.

The family met; they greeted one another and went to the palace. And along with them went their new work-man. They sat around the oak table and ate and drank and were cheerful.

"One day does not count," the rich merchant said; "let us have a good time and leave work for to-morrow."

The young workman was a fine, brave fellow, handsome and stately, and the merchant's lovely daughter liked him well.

She left the room and made him a sign to follow her. Then she gave him a touchstone and a flint.

The next day the very rich merchant with his hired workman went to the high golden mountain. The young fellow saw at once that there was no use trying to climb or even to crawl up.

"Well," said the merchant, "let us have a drink for courage."

And he gave the fellow some drowsy drink. The fellow drank and fell asleep.

The rich merchant took out a sharp knife, killed a wretched horse, cut it open, put the fellow inside, pushed in the shovel, and sewed the horse's skin together, and himself sat down in the bushes.

All at once crows came flying, black crows with iron beaks. They took hold of the carcass, lifted it up to the top of the high mountain, and began to pick at it.

The crows soon ate up the horse and were about to begin on the merchant's son, when he awoke, pushed away the crows, looked around and asked out loud:

The rich merchant below answered:

"On a golden mountain; take the shovel and dig for gold."

And the young man dug and dug, and all the gold he dug he threw down, and the rich merchant loaded it upon the carts.

"Enough!" finally shouted the master. "Thanks for thy help. Farewell!"

"As thou pleasest; there have already perished nine and ninety of such fellows as thou. With thee the count will be rounded and thou wilt be the hundredth."

The proud, rich merchant was off.

"What shall I do?" thought the poor merchant's son. ''Impossible to go down! But to stay here means death, a cruel death from hunger."

The fellow tried to think how it all happened, and he remembered the lovely girl and what she said to him in giving him the touchstone and the flint. He remembered how she said:

"Take it. When thou art in need it will prove useful."

"I fancy she had something in mind; let us try."

The poor merchant's son took out stone and flint, struck it once and lo! two brave fellows were standing before him.

"What is thy wish? What are thy commands?" said they.

"Take me from this mountain down to the seashore."

And at once the two took hold of him and carefully brought him down.

Our hero walks along the shore. See

there! a vessel comes sailing near the island.

"Ahoy! good people! take me along!"

"No time to stop!" And they went sailing by. But the winds arose and the tempest was heavy.

"It seems as if this fellow over there is not an ordinary man; we had better go back and take him along," decided the sailors.

They turned the prow toward the island, landed, took the merchant's son along with them and brought him to his native town.

It was a long time, or perhaps only a short time after--who could tell?--that one day the merchant's son took again his shovel and went to the market place in search of work.

The same very rich merchant came along in his gilded carriage; and, as of old, all the fellows who saw him coming rushed away.

"Will you be my workman?"

"I will at two hundred rubles a day. If so, let us to work."

"A rather expensive fellow."

"If too expensive go to others; get a cheap man. There were plenty of people, but when thou didst appear--thou seest thyself--not one is left."

"Well, all right. Come to-morrow to the landing place."

They met at the landing place, boarded a ship and sailed toward the island.

The first day they spent rather gayly, and on the second, master and workman went to work.

When they reached the golden mountain the rich, proud merchant treated his hired man to a tumbler.

"Before all, have a drink."

"Wait, master! thou art the head; thou must drink the first. Let me treat thee this time."

The young man had already prepared some of the drowsy stuff and he quickly mixed it with the wine and presented it to the master.

and the shovel inside, sewed it all up and hid himself in the bushes.

All at once black crows came flying, --black crows with iron beaks; they promptly lifted up the horse with the sleeping merchant inside, bore it to the top of the mountain, and began to pick the bones of their prey.

"Upon the golden mountain. Now if thou art strong after thy rest, do not lose time; take the shovel and dig. Dig quickly and I'll teach thee how to come down."

The proud, rich merchant had to obey and dug and dug. Twelve big carts were loaded.

"And thou mayst do as thou wishest! There are already ninety and nine fellows perished before thee; with thyself there will be a hundred."

The merchant's son took along with him the twelve heavy carts with gold, arrived at the golden palace and married the lovely girl; the rich merchant's daughter became mistress of all her father's wealth, and the merchant's son with his family moved to a large town to live.

He himself, like his many victims, became the prey of the black crows, black crows with iron beaks.

Well, sometimes it happens just so.