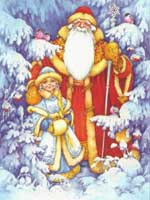 In a far-away country, somewhere in Russia, there lived a stepmother who had a stepdaughter and also a daughter of her own. Her own daughter was dear to her, and always whatever she did the mother was the first to praise her, to pet her; but there was but little praise for the stepdaughter; although good and kind, she had no other reward than reproach. What on earth could have been done? The wind blows, but stops blowing at times; the wicked woman never knows how to stop her wickedness. One bright cold day the stepmother said to her husband:

The old father grew sad, began even to weep, but nevertheless helped the young girl into the sleigh. He wished to cover her with a sheepskin in order to protect her from the cold; however, he did not do it. He was afraid; his wife was watching them out of the window. And so he went with his lovely daughter into the wide, wide fields; drove her nearly to the woods, left her there alone, and speedily drove away—he was a good man and did not care to see his daughter's death.

Alone, quite alone, remained the sweet girl. Broken-hearted and terror-stricken she repeated fervently all the prayers she knew.

Father Frost, the almighty sovereign at that place, clad in furs, with a long, long, white beard and a shining crown on his white head, approached nearer and nearer, looked at this beautiful guest of his and asked:

"Be welcome, Father Frost," answered gently the young girl. "I hope our heavenly Lord sent thee for my sinful soul."

"Art thou comfortable, sweet child?" again asked the Frost. He was exceedingly pleased with her looks and mild manners.

"Indeed I am," answered the girl, almost out of breath from cold.

And the Frost, cheerful and bright, kept crackling in the branches until the air became icy, but the good-natured girl kept repeating:

But the Frost, however, knew all about the weakness of human beings; he knew very well that few of them are really good and kind; but he knew no one of them even could struggle too long against the power of Frost, the king of winter. The kindness of the gentle girl charmed old Frost so much that he made the decision to treat her differently from others, and gave her a large heavy trunk filled with many beautiful, beautiful things. He gave her a rich "schouba" lined with precious furs; he gave her silk quilts— light like feathers and warm as a mother's lap. What a rich girl she became and how many magnificent garments she received! And besides all, old Frost gave her a blue "sarafan" ornamented with silver and pearls.

When the young girl put it on she became such a beautiful maiden that even the sun smiled at her.

The stepmother was in the kitchen busy baking pancakes for the meal which it is the custom to give to the priests and friends after the usual service for the dead.

"Now, old man," said the wife to the husband, '' go down to the wide fields and bring the body of thy daughter; we will bury her."

The old man went off. And the little dog in the corner wagged his tail and said:

"Here, take this pancake, eat it and say, 'The old woman's daughter will be married soon and the old man's daughter shall be buried soon.'" The dog ate the pancake and began anew:

The old woman was furious at the dog, but in spite of pancakes and whipping, the dog repeated the same words over and over again.

Somebody opened the gate, voices were heard laughing and talking outside. The old woman looked out and sat down in amazement. The stepdaughter was there like a princess, bright and happy in the most beautiful garments, and behind her the old father had hardly strength enough to carry the heavy, heavy trunk with the rich outfit.

"Old man!" called the stepmother, impatiently; "hitch our best horses to our best sleigh, and drive my daughter to the very same place in the wide, wide fields."

The old man obeyed as usual and took his stepdaughter to the same place and left her alone.

Old Frost was there; he looked at his new guest.

"Let me alone," harshly answered the girl; "canst thou not see that my feet and my hands are about stiff from the cold?"

The Frost kept crackling and asking questions for quite a while, but obtaining no polite answer became angry and froze the girl to death.

"Old man, go for my daughter; take the best horses; be careful; do not upset the sleigh; do not lose the trunk."

And the little dog in the corner said:

"Do not lie. Here is a cake; eat it and say, 'The old woman's daughter is clad in silver and gold.'"

The gate opened, the old woman ran out and kissed the stiff frozen lips of her daughter. She wept and wept, but there was no help, and she understood at last that through her own wickedness and envy her child had perished.