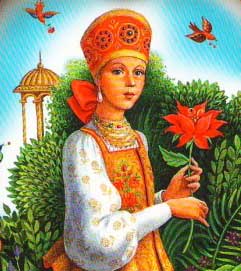 Once upon a time in a far away land a merchant was preparing to set out on a long journey. This merchant had three daughters, and he asked all of them what they would like as gifts for themselves when he returned from his voyage. The first daughter requested a golden crown, and the second one wanted a crystal mirror. The third daughter asked only for "the little scarlet flower.

The merchant set out on his journey. It did not take him very long to find a beautiful golden crown and a fine crystal mirror. He had difficulty however, finding the third gift, the scarlet flower. He searched everywhere, and eventually his search led him into a magical forest. Deep within these woods there was situated a palace, in whose courtyard grew a beautiful flower. As the merchant drew closer to the flower he realized what it was, the scarlet flower. Cautiously, the merchant picked the flower that his youngest daughter wanted so badly. Upon picking the scarlet flower he was confronted by a hideous beast, who demanded that in return for picking the flower the merchant must send one of his daughters deep into the enchanted forest, to live with the beast forever.

Upon recieving the scarlet flower, the merchant's youngest daughter agreed to go to the beast. She journeyed alone into the forest and found the castle where she would dwell forever. For a time, she lived there very happily. The beast had not revealed himself to her, and showered her daily with kindness and gifts. She started to grow quite fond of her invisible keeper, and one day asked that he show himself. The beast reluctantly gave into her plea, and just as he had feared, she recoiled in terror at the site of him." 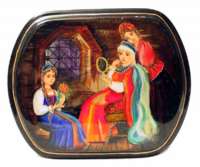 That night the girl had a haughnting dream about her father falling deathly ill. She begged the beast to release her, so that she could find her dying father. Touched by her concern, the beast released her on one condition - that she return to him in three days time. The girl found her father, and prepared to return to the beast in the alloted time. However, her sisters altered the time on the clocks, making her arrive late. There upon her arrival the girl was horrified at what she encountered. The beast was dead, lying there clutching her scarlet flower. Heartbroken, the girl embraced the dead beast, and declared her love for him. Having done this, she unknowingly broke the evil spell, and her beloved beast awoke, turning into a handsome prince.

They lived happily ever after