Here is a short hostory of finift Russian enamel jewelry craft. If you are interested to buy such products please visit Finift Jewelry category page.

Art of painting on enamel has arisen in Rostov in 1760's when first workshop was organized at archbishop house. Later individual masters worked under orders of local churches and monasteries. They wrote small icons which were used basically for decoration of subjects of church use. In second half of XVIII artists had influance of baroque style that was combined with icon painting tradition and with elements of people folk crafts. 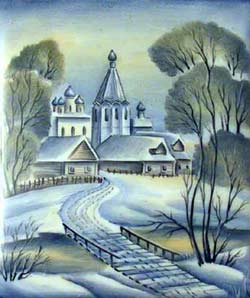 During XIX century manufacture of enamel goods and jewelry in Rostov has got mass production scale. The number of artists increased, the narrow specialization connected to separate stages of process of manufacturing of products has appeared. Small enamel production factrories were found - they consist of the master - owner, one - two journeymen and one or two pupils. In second half of XIX century way of production and distribution was changed. The leading position in the organization of a craft was a dealer who delivered materials in workshops, bought and marketed finished goods in different cities of Russia. Mass production of products has increased, main part of products were small icons .

Art language of the Rostov enamel in XIX was less homogeneous, than in the previous period. In creativity of masters almost up to middle of century features of a baroque though in general since 1820 - 1830's classicism had more active influence on the art. Conducting artists, aspiring to tops of skill, followed principles of the academic painting. But more numerous was a cohort of the handicraftsmen who maked mass production items. Their primitive by nature miniatures were inspirated by local folk culture.

Intensive development of mass production had an adverse effect on art level of products so in the the end of XIX - beginning of XX's were made attempts to overcome the crisis situation. With this purpose schools - workshops where professional artists were involved were created, new experiences were made on creation of household products with flower type paiting. 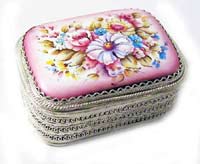 After October revolution in 1917 the artel on manufacture of art enamel was organized. In 1920 - 1930th its crafters manufactured caskets, brooches, powder boxes, frameworks for photos and other subjects with a paiting on enamel. The subjects of paiting included portraits of political and public figures of the Soviet State, writers, genre compositions, flower ornament. Within Great Patriotic War (Worl War II) activity of artel has died away.

In post-war time work of artel has renewed. In 1960 it was transformed into factory "Rostov enamel". Second half of XX century in genera is characterized by growth of manufacture, expansion of assortment and improvement of quality of products. Alongside with prodcution of mass production works new original samples are created. Now there are three factories of production of enamel items in Rostov, there is a group of artists working in personal creative workshops. Creativity of modern Rostov artists develops on the most different genre and stylistic directions.

Modern artists of factory "Rostov enamel" who make wide assortment of products (brooches, ear-rings, pendants, bracelets, toilet boxes, caskets, other souvenirs...) have finished the products up to the best art samples of a world level.

Painting on enamel on technique is close to painting on porcelain. A basis for this painting is a thin copper plate covered from both sides with a layer of enamel. During a painting process fire-resistant enamel paints on a plate are burnt some times, thus color of paints varies, as well as during burning of porcelain. 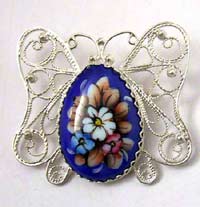 The traditional technology of performance of enamel is original. From thin, up to 1,5 mm of a copper sheet (copper and gold in the best way accept enamel) are stamped slightly convex plates of various forms and sizes. Then carefully cleaned surfaces of plates are covered with one-color enamel mass.

Enamel clearcole is as a basis for painting, it is a mixture of pounded white enamel with water. It is put on a face sheet of a plate in three layers. After drawing each layer the plate is dried in a drying oven and is burnt in a burning furnace at temperature 700-800Ñ until enamel will be melted and the surface get smooth.

To protect a plate from possible deformation during burning its back side is covered with the enamel layer named "counter-enamel".

Painting of a plate begins from drawing which is made first on paper. Then under it a clean sheet of paper is laid, and the drawing on a contour is pierced by a needle. On the bottom sheet the dot print of figure turns out. This sheet is imposed on an obverse surface grounded plate and is rubbed with the soot mixed of turpentine therefore drawing is transferred on an enamel basis.

As it was told fire-resistant paints are used for painting with melting temperature from 700 up to 8000Ñ. They are prepared from carefully milled pigments which are mixed with turpentine and lavender or turpentine oil. Each paint has the certain temperature of melting and during burning they changes the initial color. Therefore artists during work use a palette "experience" - a white enamel plate with tests of paints. By means of it the temperature of melting of each paint and its color after burning are determined.

At the first stage of a painting a thin brush is used tp make "underpainting" - primary colors are put. After that the plate is dried in a drying oven before removal of vapor of turpentine from paints, and then burns in muffle furnaces until paints will malt and will get brightness and shine.

Then the plate is got out of the muffle furnace and gets cool and the first detail painting is made during. Then the plate again is dried, burnt and cooled.

During the second stage minor details come to light, are made a semitone and color relations are specified. The third burning is made.

During creation of a simple composition with use of the limited color palette painting is finished at the second or third stage. For making of a complex miniature rich of color and shades, it is required from 4 up to 7 painting and as many burning.

Painting by fire-resistant paints on an enamel basis practically eternally keeps cleanliness, shine and a transparency of color. It is not exposed, similarly to other kinds of painting, to influence of such destructive factors, as light, temperature, humidity, pollution.